SARASOTA, FL — To mark its 10-year anniversary, the National Mayor’s Challenge for Water Conservation is calling on people across the United States to take small, daily actions to reduce water waste and promote the health and sustainability of our nation’s water-based ecosystems. The challenge, presented by the Wyland Foundation and Toyota, April 1-30, with support from The Toro Company, US EPA, Hobie, and National League of Cities, brings civic leaders and residents together to become better informed stewards of one of our most precious resources.

The campaign rewards residents who take part with a chance to win $3,000 toward their home utility bills, home irrigation prizes from The Toro Company, Hobie gift cards, and hundreds more eco-friendly prizes. Residents can also nominate a deserving charity in their city to receive a 2021 new-generation Toyota Highlander Hybrid XLE. Cities with the most residents that make pledges qualify for over $50,000 in prize drawings. Residents make their pledges online at www.mywaterpledge.com.

“In the last 10 years, we’ve seen climate change and shifting weather patterns affect the distribution of water, pollution impacting the quality of water, and fresh water sources that are being used at a quicker rate than they are bring refilled,” said Wyland Foundation President Steve Creech. “That’s why is so important to have programs like this where people can learn what they can do to help.”

Last year, mayors from 39 states encouraged residents to make over 300,000 pledges to promote drought resiliency, protect watersheds, and ultimately reduce stress on aging water infrastructure. Students and teachers can take part in the pledge, too, by accessing a special section of the website. Once there, teachers can download lesson plans relating to water conservation, make the pledge on behalf of their classes and enter to win school prizes, including classroom supplies and gift cards for their school. The foundation has also created a new digital tool called MyVolunteer Water Project, in support of the program, that gives residents a unique way to do hands-on home, community, and workplace projects year-round in support of their city’s sustainability efforts. The more projects residents do throughout the year, the better chance a city wins the mayor’s challenge in April.

The 10-year anniversary campaign kicked off April 1 in Sarasota, Florida. Re-broadcast of the event is available on ZOOM, and will also launch at multi-city U.S. Tour of the Wyland Foundation’s 1,000 square foot traveling Clean Water Mobile Learning Center. The non-profit campaign is presented in association with EPA WaterSense, The Toro Company, National League of Cities, Hobie Surf Shops, and Petal. 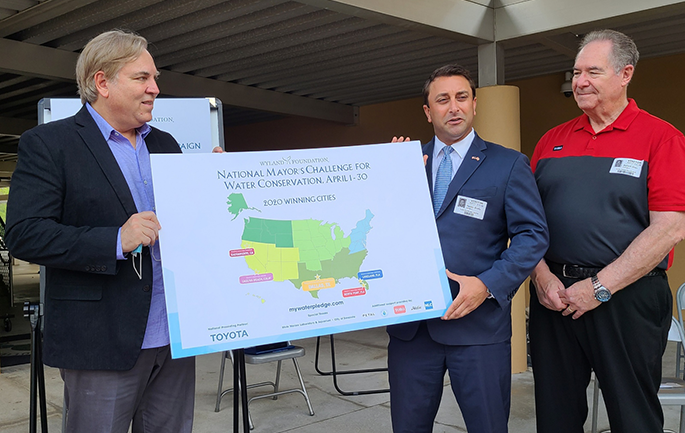